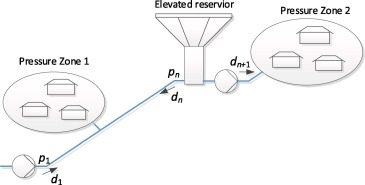 Fig. 1. Sketch of the water supply network used as model of local energy consumers. is the flow of water into pressure zone 1, with pressure .

Everyone talks about AI and machine learning, but a demo project with a water tower shows that a model with stochastic differential equations can describe energy flexibility surprisingly well with just a few intuitive parameters.

If the CO2 emission is to be reduced, the proportion of renewable energy sources must be significantly increased. If at the same time, the cost of the green transition is to be kept down efficiently, there is a great need for energy flexibility on the part of consumers, so that they use electricity when there is plenty of green energy in the electricity grid. And here is the price of electricity a co-player.

Rune Grønborg Junker, Postdoc at DTU Compute, together with colleagues and with the help of Grundfos, has found an intuitive way in which mathematical models describe how energy-flexible consumers react to electricity prices. While many focus on AI and machine learning, the researchers here have returned to classical mathematics to find the answer.

– At AI, you do a lot, but you don’t quite know what happens. Here we have done something intuitive that makes sense. When we test our model, we can understand the things we see because we apply stochastic differential equations. The differential equations describe how people behave on average. While the stochastic part describes how in practice there is a degree of uncertainty in how people actually consume energy. You could say that this is a kind of formulating physical laws for energy, says Rune Grønborg Junker.

– Right now, though, AI doesn’t work at all for such a description either. It may be that it’s going to do it sometime, but we’re nowhere near having something that works. This, on the other hand, is something that works now. In addition, AI should estimate maybe 500 numbers, here just eight numbers. It makes a significant difference to the robustness, he says.

– As such, savings of either 5.4% or 4.1% in energy flexibility don’t count. For it will be impossible to predict the future 100%. We have focused on showing that using the model can take advantage of flexibility 76%, so it is reasonably close to being as efficient as it can be. If we focus more on optimizing the model, we must expect the result to be even better, says Rune Grønborg Junker.

Examines the possibilities of energy flexibility in the balance markets

The water tower is a simple system where the dynamics are controlled. Once the tower is completely filled, there is no room for more water.

– Therefore, there is virtually no difference between reality and simulation. And we have used real data from the water tower, so it should be easy to use the model in real life. Just as it fits, for example, the battery in an electric car, which must also be discharged when it is filled up completely, because there is then no room for more, says Rune Grønborg Junker.

In this project, we have chosen to focus on the simplest market, namely the spot market, but it is expected that there is more value in using energy flexibility in the balance markets. The team is therefore now investigating the possibilities there.

DTU Compute and Grundfos are the first to test price management for flexibility in this way. The demo project is based on the work Rune Grønborg Junker has done in his PhD, which he defended in February 2020.

The demonstration project is mainly paid by the Innovation Fund Denmark through the CITIES project (Centre for IT–Intelligent Energy Systems) and the FED project; Flexible Energy Denmark. Grundfos and Bjerringbro Community Waterworks are responsible for data on the water tower. The results of the test case have just been published in the journal Applied Energy. Learn more here:

Tweets by @CITIES_Centre
We use cookies to track our visitor numbers. By clicking “Accept”, you consent to the use of this.
Cookie settingsACCEPT
Manage consent

This website uses cookies to improve your experience while you navigate through the website. Out of these, the cookies that are categorized as necessary are stored on your browser as they are essential for the working of basic functionalities of the website. We also use third-party cookies that help us analyze and understand how you use this website. These cookies will be stored in your browser only with your consent. You also have the option to opt-out of these cookies. But opting out of some of these cookies may affect your browsing experience.
Necessary Always Enabled
Necessary cookies are absolutely essential for the website to function properly. These cookies ensure basic functionalities and security features of the website, anonymously.
Functional
Functional cookies help to perform certain functionalities like sharing the content of the website on social media platforms, collect feedbacks, and other third-party features.
Performance
Performance cookies are used to understand and analyze the key performance indexes of the website which helps in delivering a better user experience for the visitors.
Analytics
Analytical cookies are used to understand how visitors interact with the website. These cookies help provide information on metrics the number of visitors, bounce rate, traffic source, etc.
Advertisement
Advertisement cookies are used to provide visitors with relevant ads and marketing campaigns. These cookies track visitors across websites and collect information to provide customized ads.
Others
Other uncategorized cookies are those that are being analyzed and have not been classified into a category as yet.
SAVE & ACCEPT